Spring came late to my corner of the world. Now all trees are in full bloom, of course, and Nature is at its best, but only one month ago it was rainy and miserable. So much better then that I was able to attend not only one but two merry dance events! In March The Regency group met up for some informal dancing and eating. It was our usual go-to place, the Tyresö castle.  And as always I failed to take any pictures of us dancing since I was so busy doing just that. The music came from a playlist, and as you can see we did not bother to move about the furniture too much. It was nice to meet some new fellows there! 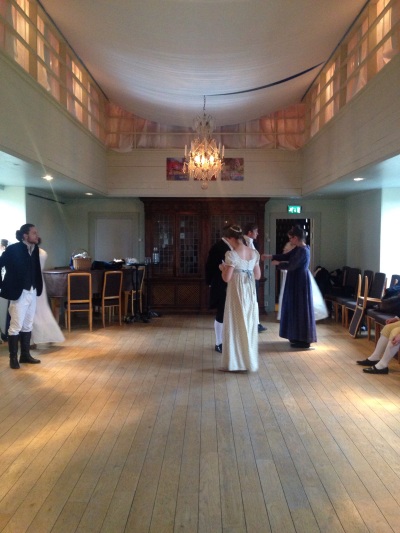 Getting ready in the ballroom. 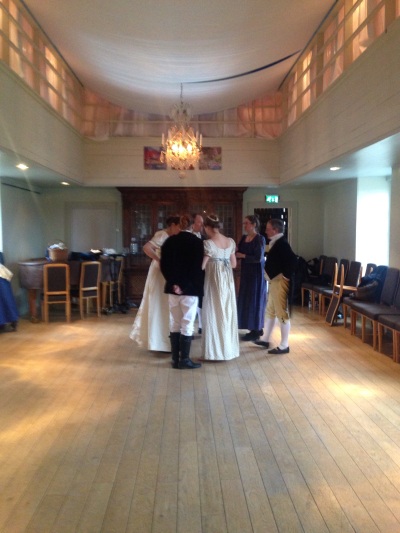 What dances next? You have to admit this looks like one of those period water colour sketches.

And what it could look like in a French fashion plate, c 1790. More of the big “Hedgehog” style, but you see the shape with big curls on both sides, set quite low, completely covering the ears. Actually my wig looks nothing like this…

Perhaps like this? Although very “natural”. Friedrich Schiller by Ludovike Simanoiz, 1790´s.

Or this? A (unfinished) portrait of King Gustav III of Sweden, by Lorens Pasch the younger, Late 1780`s? 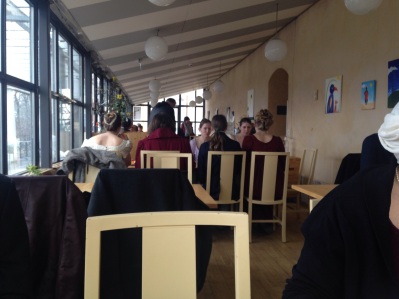 Not a great photo at all, but this is us having brunch in the restaurant. We also managed to occupy and re-arrange several tables.

There was another event in May, this time with music performed by this wonderful ensemble I wrote about after the ball last summer. This was in town, at the Kristinehof manor. Costume-wise there were many fine outfits ranging from 1750´s-1810´s.

Instructions. Some of the new dances were rather difficult! The menuett is perhaps not my cup of tea…

And back to some more wig-talk:

Slightly out of focus and cropped head, but I wore the new waistcoat. And restyled the wig. It was falling down last time and needed to be repinned. I ended up with more 1770-1780 in style. Will go back to the later style, but it was fun to try. Notice the chinoiserie/rococo style wallpaper in this lovely chamber?

A similar hairstyle can be seen in this portrait. I realise now that my wig lacks the relative lightness. It looks too heavy and should be brushed back more. The Earl of Suffolk, painting by Joshua Reynolds, 1770´s. 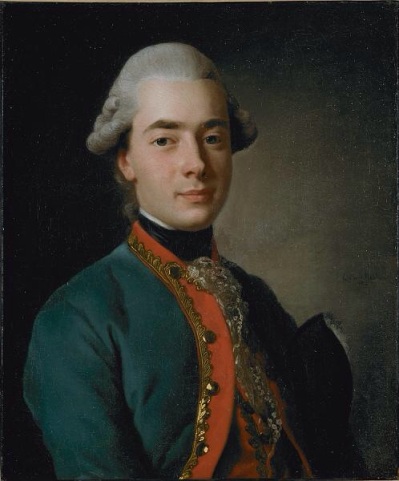 Oh, well. Wigs are very practical and fun (don´t you think?), but next event I go to will be in my own hair. Back to 1800-something. Another post? I end this one with the period correct dance programme from the May assembly. 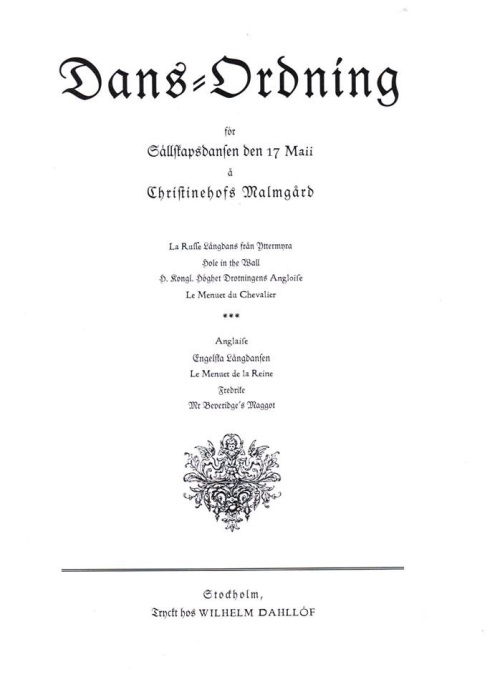 Last weekend I finished the buttonholes and yesterday I sewed on the buttons. So all work is done, and I got myself a new waistcoat! If you care to read about the process I managed to write five (!) installments for this little project. Click on links here, here, here, here, and here.

Getting ready for some quick photos.

The idea was to make a rather plain and comfortable waistcoat for summer picnics. There was just enough of this pink linen for the typical 1790-1820’s style with short waist.

Six metal buttons. They are just ordinary modern buttons from the fabric store, but have that suitable neo-classical look.

I found the exact match of cotton embroidery thread. I used two strands for the buttonholes and one strand for the prick-stitches.

Closeup of collar and lapel. 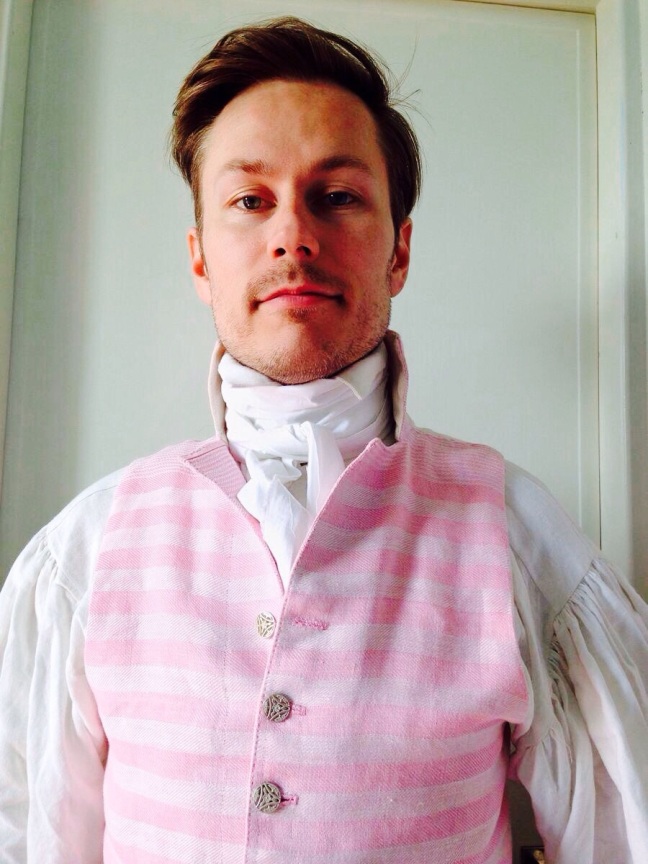 Sometimes the line between ones profession and ones hobbies becomes blurred and even dissolves. Like when I was invited by my colleague Elisabeth to give a talk about The Grand Tour. This happened the other night at The Museum of Mediterranean and Near Eastern Antiquities (Medelhavsmuseet, in Stockholm) when one of their “Friday late” events was about Learning. A handful of university professors and other guests talked about learning, going back to Aristotle, Plato, and Socrates et al. My contribution was to give a dramatized tour in the Roman gallery. In full Regency gear, backed up by Helena and Anders, I introduced the audience to the concept of The Grand Tour, that is travelling to the Continent (France and Italy) in the 18th and early 19th centuries to experience Art and Culture. And to commission a portrait or perhaps spend a lot of money on recently excavated  Greek or Roman antiques. The grand tourist was nearly always a man, from the aristocracy or at least the upper social sphere, and used daddy´s money. Travellers of limited means, such as art students and architects, could join a Grand Tour party as a cicerone, or could apply for a scholarship, or was fortunate to find a private sponsor.

A view of the Lapidarium with its Roman sculptures. The magnificent renaissance-revival building was originally a bank. The central courtyard is a copy of the Palazzo Bevilaqua in Bologna.

Anders and Helena joined me on the Tour. Photo by Ove Kaneberg

Presenting the wonders of Naples. Photo by Ove Kaneberg.

I kept all my notes, drawings, and “engravings” in this “antique” portfolio. (I actually made it the same afternoon, based on originals I have seen in museum collections.)

There is an entertaining episode in Little Dorrit (BBC, 2008) when the Dorrits have come to money and go on a Grand Tour. They hire this extremely annoying Mrs General (Pam Ferris) to teach the girls genteel manners (“elocution and deportment”). The gentry is expected to know the ways of the World, so the Dorrits simply must cross the Alps and go to Italy. In Venice they rent a grand palazzo. It does not run smoothly, to say the least. Another famous example is of course A room with a view, but that is two generations later when the railway had made travelling considerably easier.

It looks like the museum was empty, but everybody was up in the auditorium when we took the pictures. (And when it was my turn I obviously couldn´t wave about with a camera.)

We had a great evening and of course answered many questions about our clothes. The audience was very focused and eager to learn, so I made a on the spot decision to not joke too much and be a little more serious than was originally intended. There was so much to talk about: Goethe. How the actual travelling was done (boat, horses and carriage, by foot). What visitors from northern Europe thought about the great Italian cities, architecture, art, food, lodging, Italians, and so on. Did you know that the Swedish king Gustaf III climbed the Mount Vesuvius – in a sedan chair? Or that many British tourists fell in love with Florence because the city reminded them of Bath?