This wonderful little painting is tucked away somewhere in the Swedish National museum. It is a small gouache, painted in 1799. A gentleman, (penniless aristocrat?), deshabillé in robe and slippers, is receiving visitors while having his elegant wig powdered. It is not a social call. The stern looking visitors are creditors. They have delivered bills. Who on earth let them in?! The gentleman is most likely taken by surprise but appears to be calm, almost nonchalant – with those red slippers and all – and in control of the situation. We can´t know for sure, but let us hope they managed to avoid an embarrassing outcome…

The manservant (holding a comb between his teeth) is more fashion-forward, compared to his master. He has stuck a comb in his fashionably coiffed curls, and curling tongs in the pocket on his practical tailcoat. As a personal touch he has chosen to match his otherwise grey outfit and top boots with clear blue stockings.

The bedchamber (rented rooms above an inn?) looks very spartan, but there is a elegant card table holding a teacup, candlestick, and nick nacks. Behind it a glimpse of the bed in the Gustavian style with a sheer canopy in blue.

The powder must have been everywhere. It is understandable that those who could afford it installed a powder room while others had to make do on a landing in the stairway. And I need not point out that this is before vacuum cleaners. By 1799 wigs were definitely going out of fashion. Only gentlemen of the old school (and where it was part of ones profession such as the clergy, medicine, and the law) would hang on to them into the first decades of the new century.

A charicature, ca 1770-1790, where the gentleman and his valet actually transferred on to the landing.

On a side note, there was another, more skilled, Swedish genre-painter also named Pehr, Pehr Hilleström. His paintings give us a unique glimpse of domestic life among the urban middling classes around 1800. I think that is another blog post, but here is one painting, to give you an idea:

A Mother´s Advice. Pehr Hilleström, ca 1800. The State Hermitage Museum. Notice how the daughter is wearing a fashionably high waisted gown while the mother – although we can´t see for sure – is dressed in more conservative dark silks.

A point of interest: to me it looks like gentlemen in formal dress, as depicted in fashion plates 1800-1810-ish, still used powder on their curls. Or what do you think? 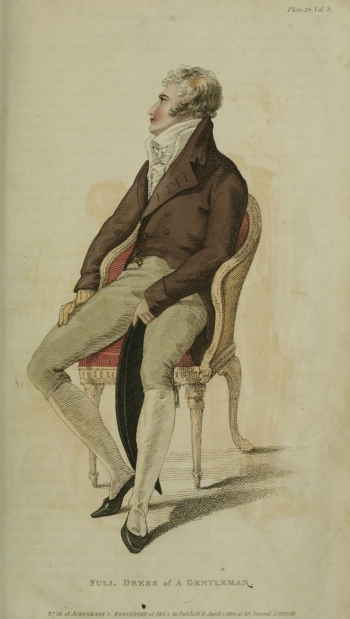 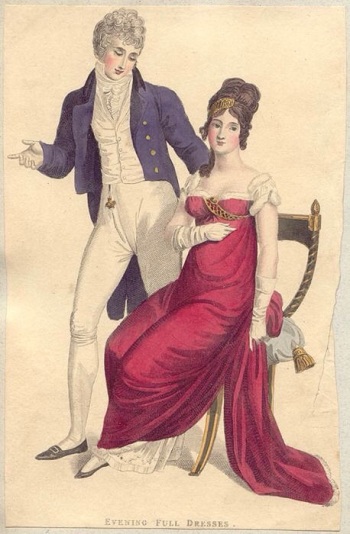