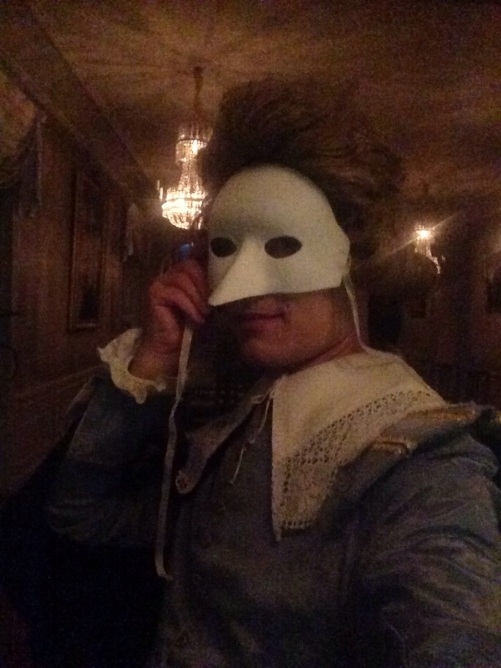 If judging by number of posts on this blog lately it may look like Yours Truly has had his attention elsewhere. However, that is not the case. Wigs have been styled and balls have been attended! I have much to tell so today´s post will be a long one.

This past month turned out to be unusually hectic. While toiling away at work I was invited to go with friends to S:t Petersburg (!) and attend the Nicolaevsky ball. The ball was organised by Russian reenactors, and was of course to be held in a gem of a palace. Dresscode was strictly Empire. Apparently several of the dancers were extras in the new BBC adaptation of Tolstoy’s War and Peace. Almost to good to be true, no? Sadly it was practically impossible to take days off from work, and I could not justify the expence at the moment.

I decided not to go, but fortunately I was able to dive into another costume event – an event that required very little travelling and no sewing: The Gustavian Masquerade Ball of 2016.

This ball is arranged every year to commemorate the great eighteenth century king Gustaf III of Sweden (1746-1792). Same generation as Louis XVI and Marie Antoinette, he was a great patron of the fine arts, and he was fond of theatre in particular. He was assassinated (for political reasons) at the now infamous masquerade ball at the Royal Opera, on March 16, 1792. (Of course Verdi turned this in to his famous opera Un ballo in maschera.)

There was no time to sew a new costume. I would have to make do with something I already had. Lacking decent eighteenth century attire, and spending some time googling for masked ball-pictures, I realised I could use my old 1630´s costume and dress “á la Van Dyck”. I made the costume over a decade ago, and it consists of a doublet and breeches in blue silk, a short cloak in black velvet, and the characteristic cuffs and lace collar. 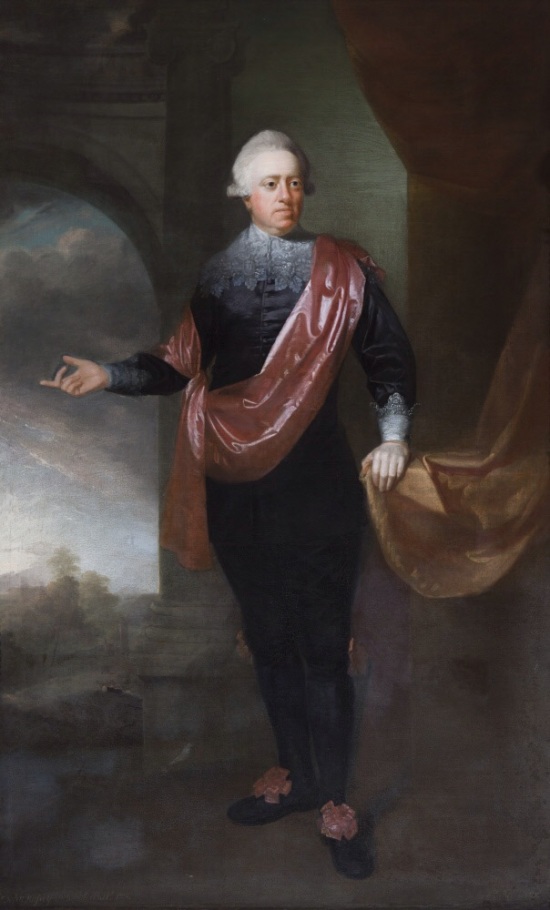 It was popular among the Aristocracy to be portrayed wearing fashions in the style of the cavaliers during the reign of Charles I, as seeen in so many paintings by the artist Anthony van Dyck. I suppose it was part of the newborn romantic interest in history. (Particularily in Britain. A better known phenomenon is of course the 18th century Gothic revival architecture.)

So, I already had a costume and I also happened to have a white papier-mache mask. It only needed some tweaking. I trimmed off the chin and part of the forehead, and added on a more pronounced nose. Then I covered it with white cotton for a smooth finish and replaced the elastic band with som white silk ribbon. (It certainly did the trick, several friends didn´t recognize me until I spoke!)

Notice that Baron Delaval is wearing fashionably old-fashioned clothes, but his hair is very 1774? Most portraits in this genre show that these gentlemen held on to their usual powdered wigs. And so would I. My plan was to do a 1780´s hedgehog hairstyle. Something like William Pitt the Younger: 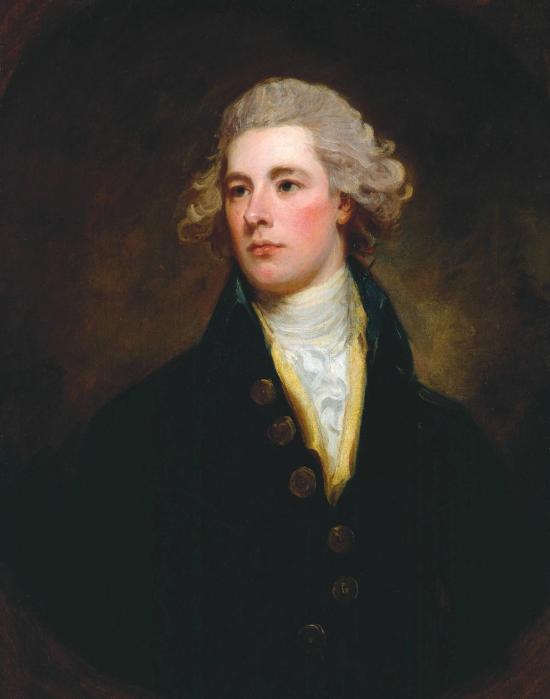 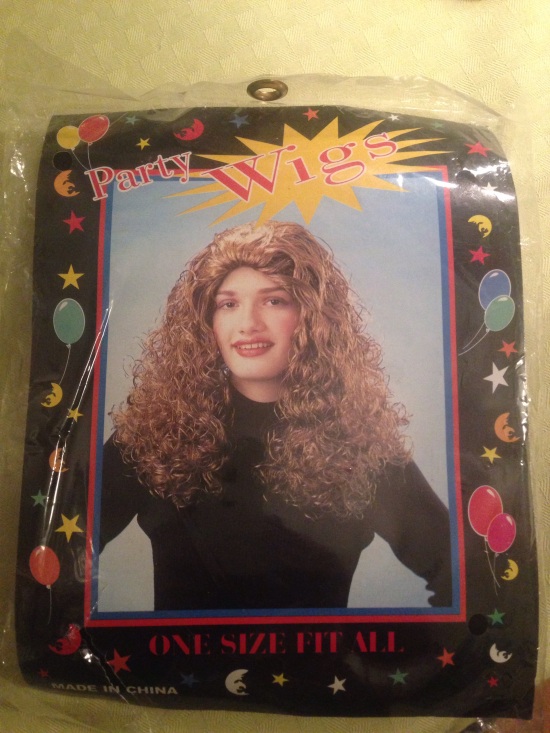 I bought a reasonably priced wig of no particular quality. The package tells all. 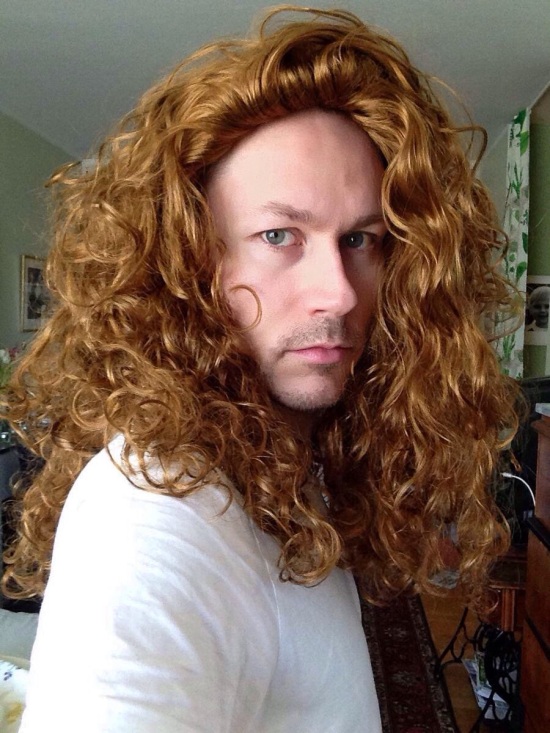 Unpacking the wig and channelling my inner rock star. Please don´t judge me. I had to start somewhere… 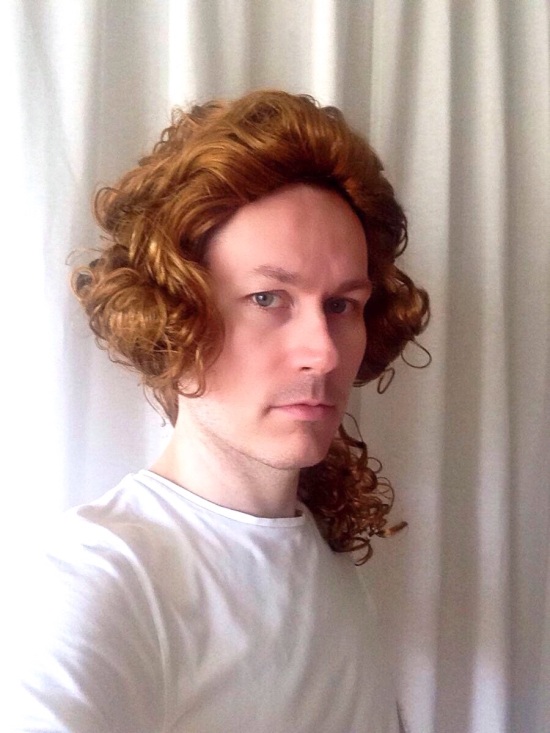 Travelling back in time: a matter of moments, and it already looked more appropriate. Here I divided the hair in four sections: front, back, and one section on each side. I wanted more frizz, and intended to do tight rag curls, but changed my mind, saving time and thinking the hair had enough body, and only needed pins and pomade (hairspray). 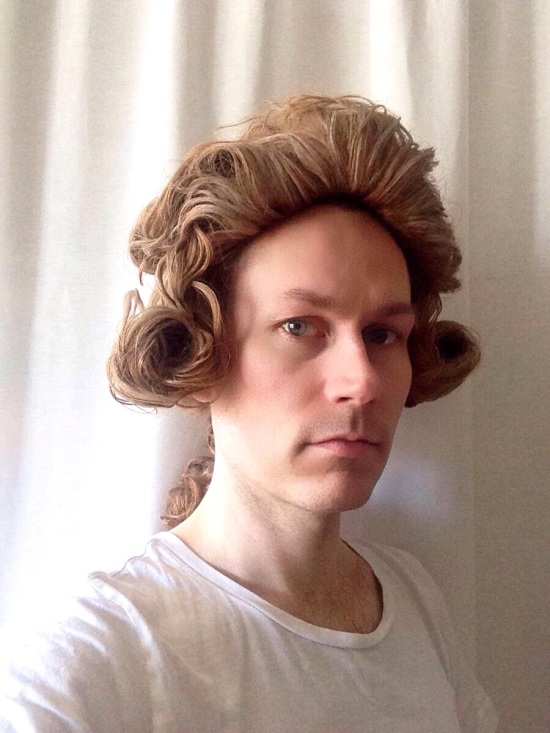 Nearly finished! Powder makes all the difference. Generous amounts of hairspray, and equally generous sprinkling of powder to get rid of the shine. I used a cheap body talcum powder from the chemist. 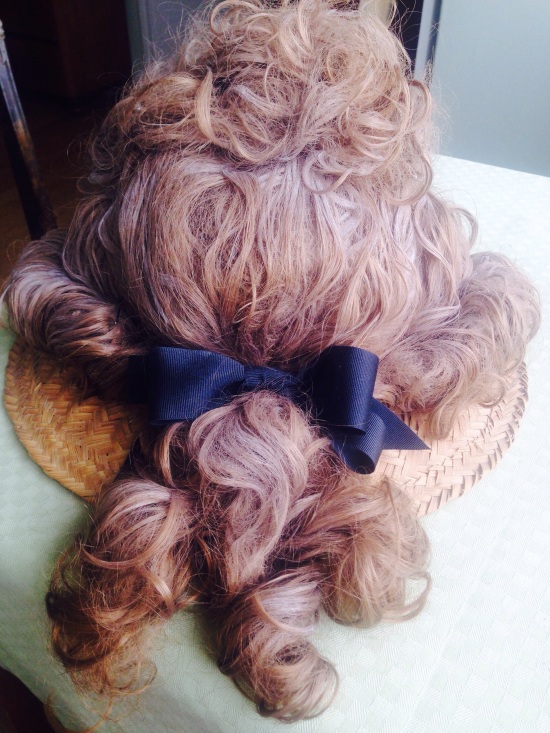 Looks like a dead poodle here but I was happy with the result. 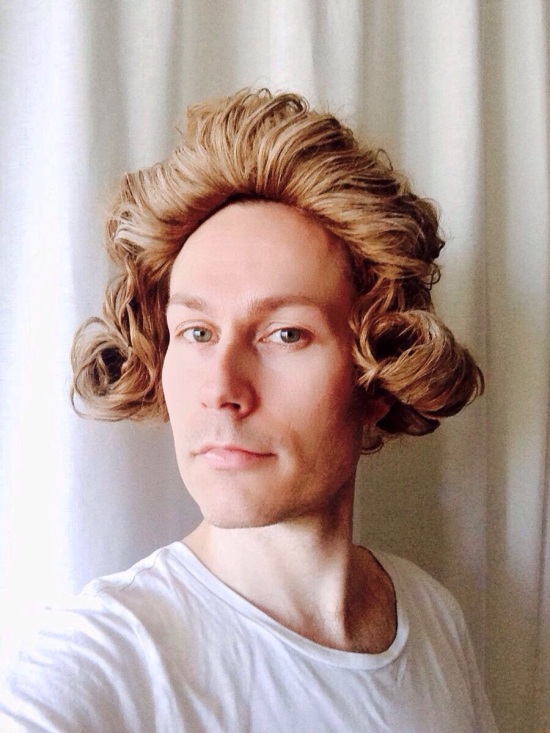 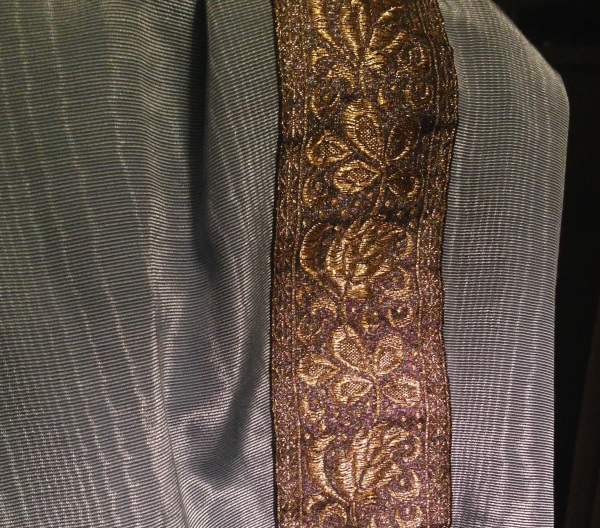 The costume is a sky-blue watered silk, with gold trimmings. Here is a closeup of the wide breeches. 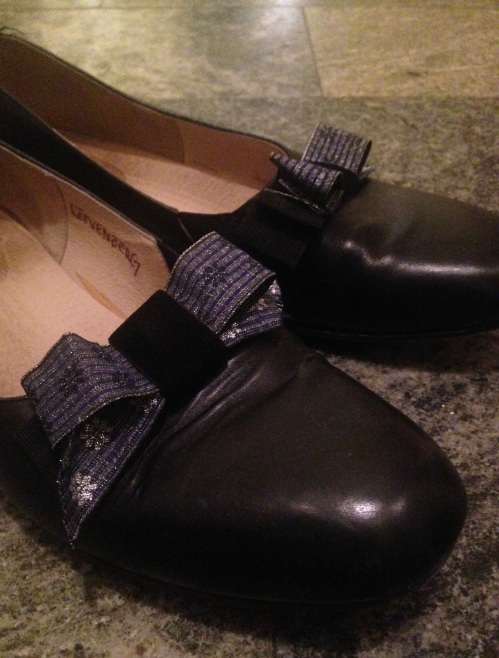 I spruced up my opera pumps with some ribbon. I opted for dark blue stockings and blue silk garters.

A quick snap in the lobby while waiting for the taxi. The costume came with a lace collar and a short velvet cloak. (Partly hidden by the plant.)

The ball was magical and I really enjoyed every minute of it. It was well planned in every detail, from the music and dances to refreshments and decorations.

I often get questions about the dances in our repertoire, so below is the programme. You probably recognize the country dances but there were many quadrilles aswell. (All of the dances with Swedish names. I always confuse them so I made myself indisposed during one of them, and made sure to find able-bodied ladies for the others.) 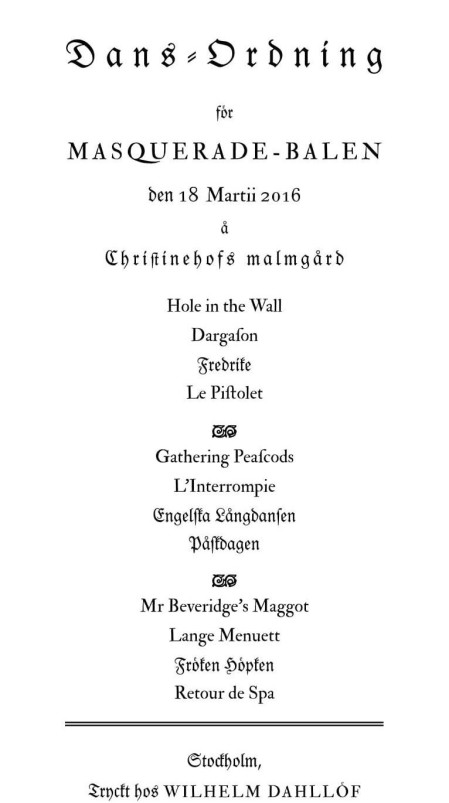 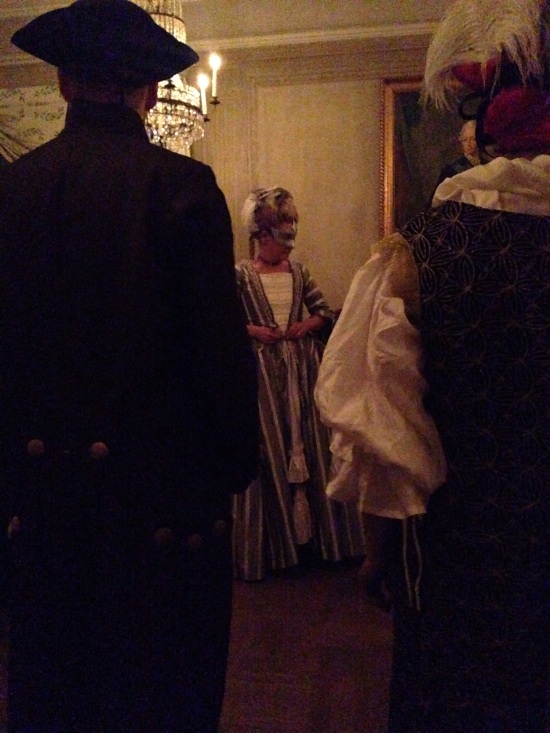 Needless to say, but the costumes came in a wide range of period-appropriate spectacular to understated elegance. 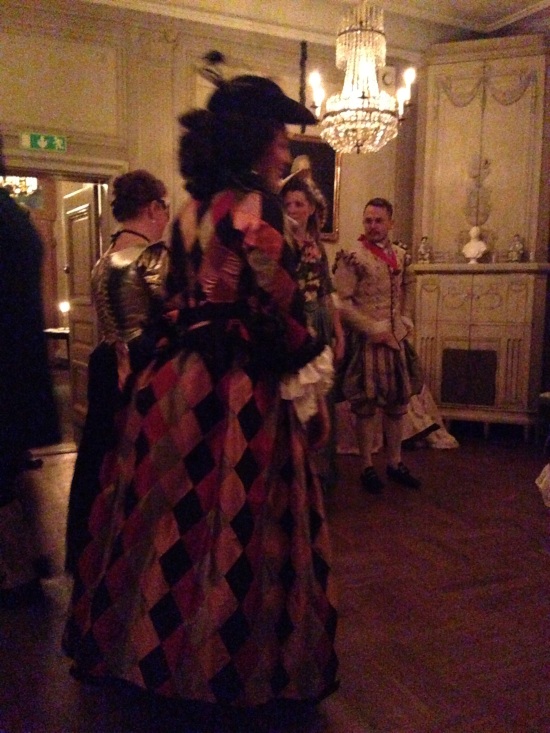 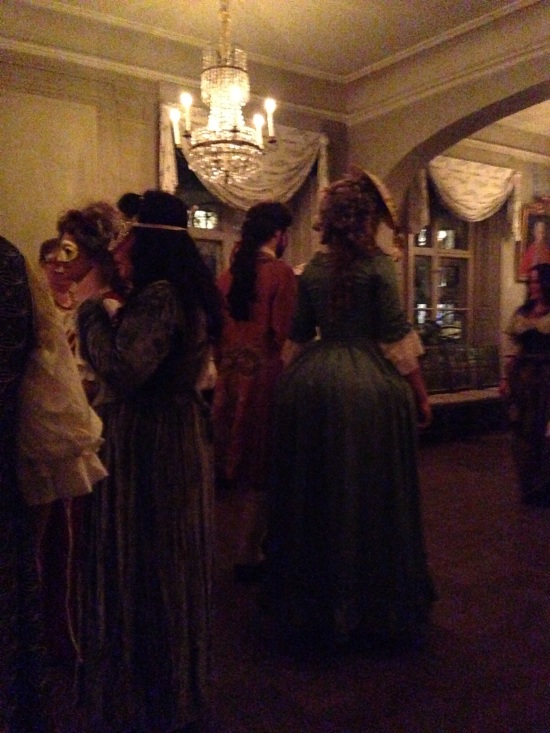 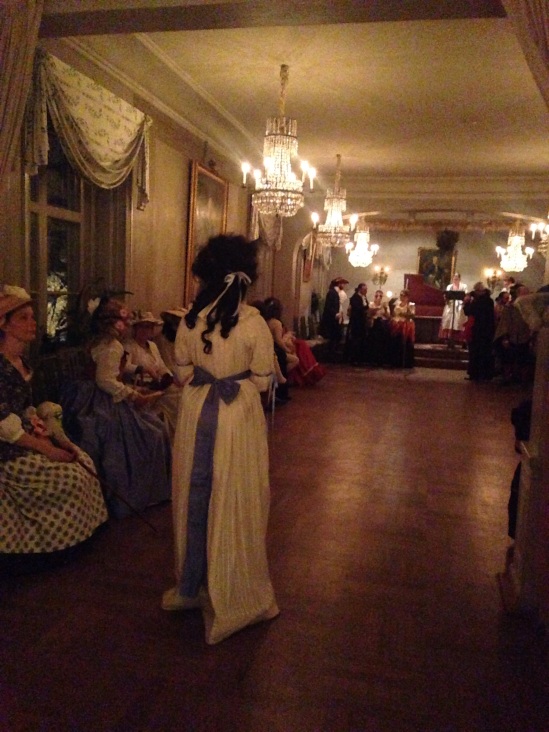 There were two intervals when we could rest our tired feet while being treated to lovely musical entertainment. 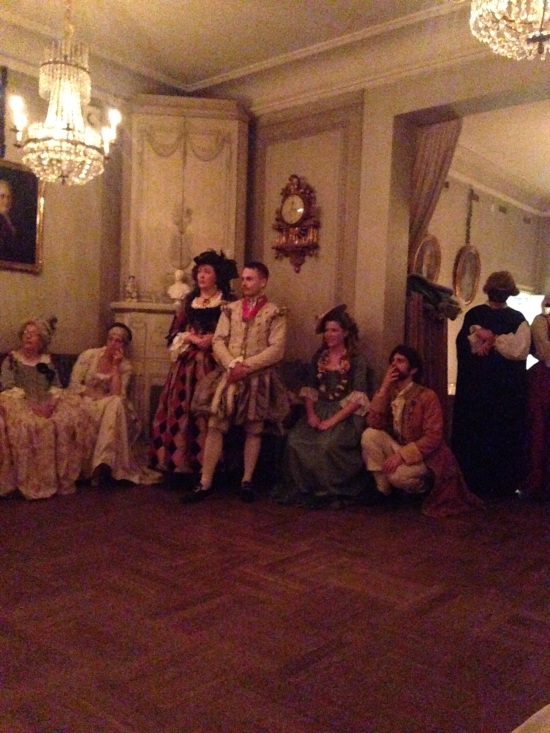 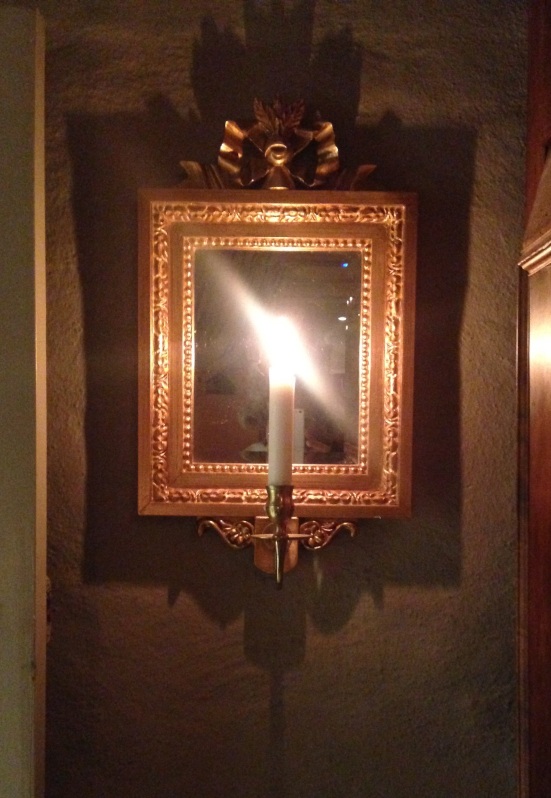 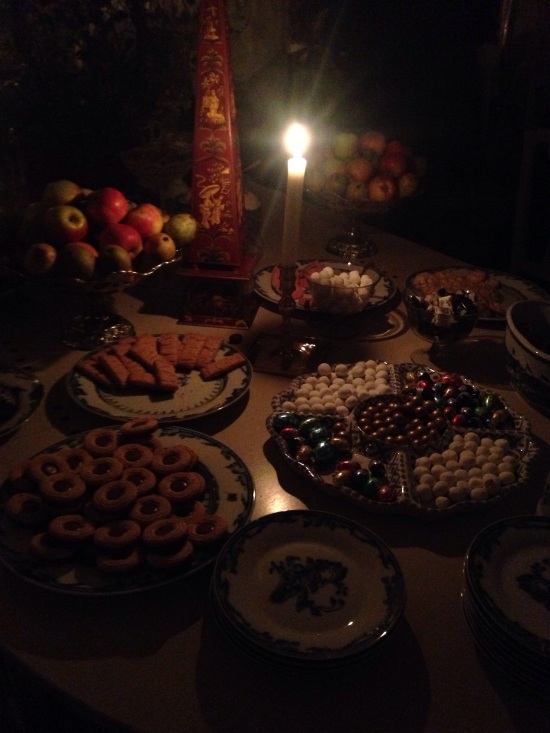 What better way to end this glorious evening than going upstairs and enjoying a late supper lovingly prepared by the wonderful folks at the manor? 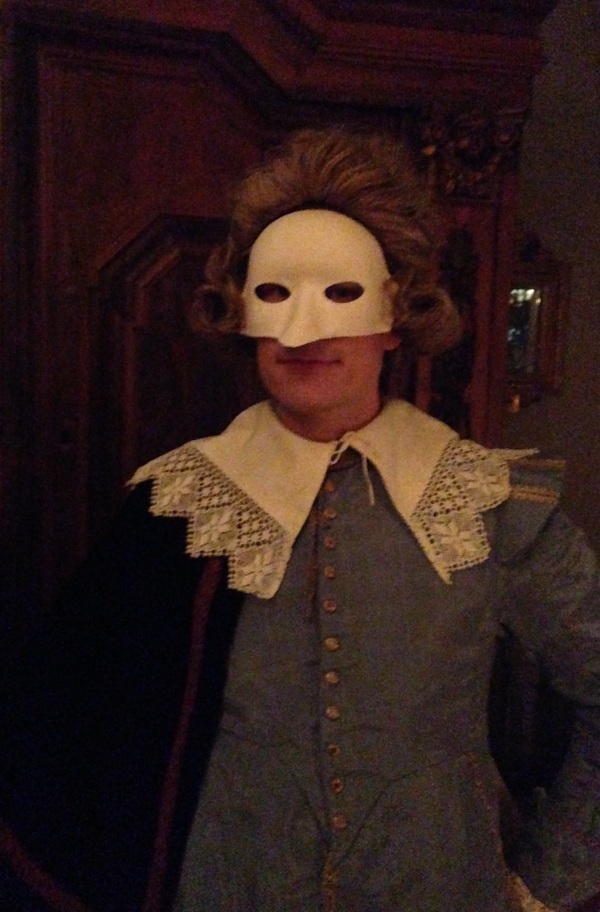 This turned out to be a long post! Next time I should report on the waistcoat…