If you are dealing with eighteenth or nineteenth century gentlemen´s fashions you will sooner or later come across discussions about a certain detail: the neckcloth, also known as the cravat or possibly the stock. What exactly did gentlemen wear around their necks?

Any chap during the Regency era would feel terribly undressed without the tall collars and the neckcloth.  The contrast between starched white linen and a dark coat is striking. It frames the face in a flattering way. At the time one sought to create the illusion of one´s head resting nobly on a Grecian column. The greatest dandy of them all, Beau Brummel, is often given credit for the look. His doings have been described so often, so I will leave him at that.

Cravats are basically a length of fabric tied around the neck in a knot. But are the cravats triangular or rectangular? Exactly how stiff is it supposed to be? If I was planning to make a new cravat – should I look for bleached linen of finest possible quality or readily available cotton batiste? Or silk? What is historically accurate?  There seems to be different opinions on that matter.

Perhaps I am a fool, but I decided to make an attempt to sort out the intricasies of the cravat, mainly through portraits and some extant examples, and I wrap it up with showing you a couple of basic knots.

Let us begin with taking a look at some portraits:

Richard Cosway: Portrait miniature of a gentleman, “wearing blue coat with gold buttons, tied stock and frilled cravat”, 1790. The softer look of the Georgians is transforming into the high collar and stiff cravat of the Regency. Is he actually wearing a stock AND a cravat? I thought the frill came with the shirt…

A-L Girodet de Roucy-Trioson: Portrait of J. B. Belley (detail), deputy for Saint-Domingue, 1797. Musée National du Château, Versailles. A nonchalant cravat paired with a frilled shirt. The amount of fabric and the ends suggest that this is a square folded into a triangle. 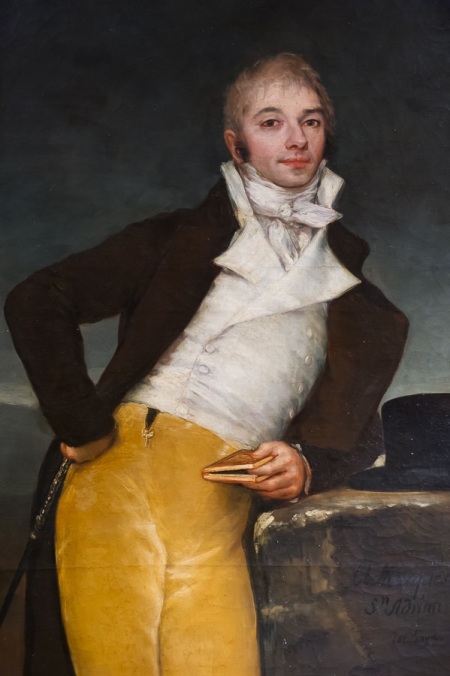 Jean-Francois Sablet: Self portrait, 1805. Collar, cravat (or stock), and frill. The knot is so small it nearly blends with the frill, so is Monsieur Sablet actually wearing a stock? 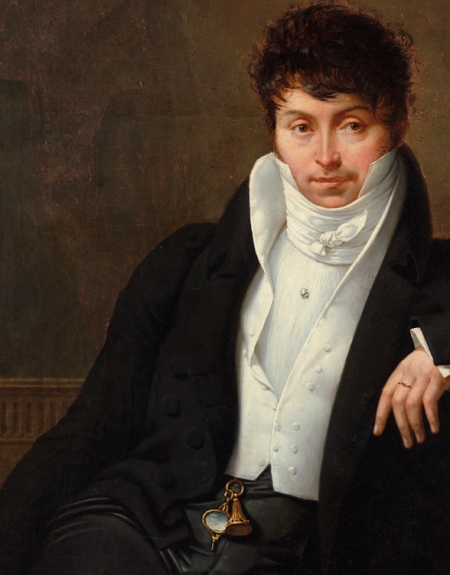 M-J Blondel: Portrait of Pierre-Jean-George Cabanis, c. 1810. Frill is gone but the collar is higher than ever. Is this a stock, with the ends tied in front? It seems very stiff, yet loose fitting. Does the shape of the ends suggest a triangle shaped cravat?  And the stiffness leads us to… starch.

Starch? Seems to have been essential, since it is so often mentioned. I wonder how stiff the cravats actually were though. They do not always look all that starched to me. (Just look at the Marques above.) Would it be possible to tie a neat bow if the fabric was stiff as paper? Or was it enough to starch only lightly just to keep the white crispness? (As opposed to labourers in soft neckcloths in different colours.) Or was it different depending on whether it was half dress or full dress? Anyway, rice starch would apparently do the trick – although I have not tried it yet. All that washing, starching, and ironing sure kept the maids busy. Especially if you discarded a neckcloth that didn´t turn out well. You only had the one chance.

Adventures with starch, an interesting discussion over on the Regency Society of America . (Image borrowed from there.) Note that the collar is made in two pieces: the upper piece is slightly gathered to a lower band. The frill is detachable. This image gives a good view of the equally starched cuffs.

Good example of collar and frill, on another shirt. (I am not sure this is an extant garment.) The collar was either left standing or was folded down over or under the tie. Borrowed this image from excellent Darcy clothing.

It is very similar to this shirt from Nordiska museet, Stockholm, that I had the opportunity to examine some time ago. It was obviously not starched at all, but of very fine quality. One difference is the closure with ties instead of buttons.

The neckcloth could be worn under or over the shirt collar. This is crucial for the result. During the eighteenth century before collars increased in height, they could be folded down before or after tying on the cravat. The collar would then be either completely hidden or visible like a modern shirt and tie combination. The overall narrower silhouette towards the end of the century saw the new fashion of keeping the collar upright with the cravat clearly visible.

Baron Gros: Baron Gerard. Ca 1790. The Metropolitan museum. A folded down collar. (The collar is actually very tall, since it is folded down and still touches the jaw!)

Thomas Lawrence: Portrait of Humphry Davy. Ca 1821. National Portrait Gallery, London. Only the very top of the collar is folded down over the cravat.

The often cited pamphlet Neckclothitania was published in 1818 as a satire that made fun of popular cravat styles of the time. The descriptions are written in a style that was entertaining but were probably not meant to be taken too seriously. They look like the same knots with very small variations.

The actual neckcloth was cut either as a rectangle or square. Sources differ, but there were basically three options when choosing the material: finest linen, cotton lawn, or silk, always white. Coloured neckcloths were introduced in the 1820´s, but the white neckcloth continued to be used on formal occasions, a custom that survives to this day. Shirts could be of a lesser quality since little of them actually showed, saving the finer material for collar and cuffs. I have always preferred the rectangular cravat, which in my opinion is easier to handle. Mine is about one foot (30 cm) wide and sixty inches (150 cm) long, hemmed and folded lengthwise along the middle. The ends are cut straight along the grain of the fabric and are consealed by the waistcoat. Another option is to cut them diagonally, which gives a nice finish when tying a knot with exposed ends. When the neckcloth is a square, about one yard on each side, it is first folded diagonally, then folded again and again until a suitable width.

An alternative to the cravat was the neck-stock. This might come as a surprise to you. At least I have never given it much thought before. The stock is essentially a pre-tied cravat. This was the most formal neckwear, a collar or band of white material of a fine quality, carefully pleated horizontally to fit over a shirt collar and tightly around the neck. They could be without folds too, and were then stiffened with paper and sometimes even boned like stays. Military officers often wore black stocks, made of fabric or leather. The stock had tabs in the back that tied, buttoned or buckled together with a metal buckle. Buckles were commonly used because they were easier to adjust and they kept the stock firmly in place. During the eighteenth century the stock often had a decorative ruffle,  jabot, gathered at the front. This is the cause of some confusion, I think. Another version (that still exists today) is the stock with hanging linen bands, known as short bands. These stocks represented the learned professions, clergymen, barristers, and academics. This looks very much like a cravat with the decorative ends hanging down, covering the shirt breast. Sometimes when a gentleman desired a nice knot or bow, a cravat was tied on top of the stock. I think they simply led a parallell existence. The stock was in use in civilian fashion through the 184os-1850s (and came in different colours), before shrinking into the narrow clip-on bow tie of the late Victorians.

“This stock is beautifully constructed from a lavish amount of material–62 inches of fine semisheer cotton gathered into the three-inch wide linen tabs that fastened at the back of the neck.” Colonial Williamsburg, Acc. No. 2008-114 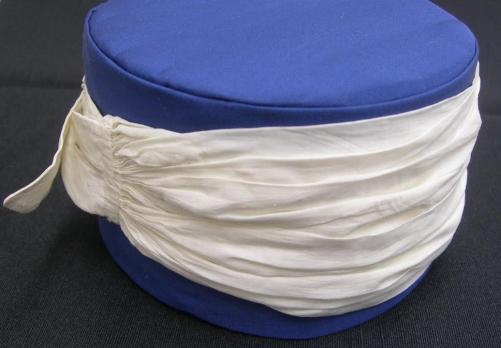 White linen neck stock consisting of fabric gathered at each end to linen tabs with fine cartridge pleating. One tab has a single buttonhole for receiving a removable stock buckle with a T-shaped chape. Colonial Williamsburg, Acc. No. 2011-2

Stock and a fancy buckle. Image from Nadelmaid. 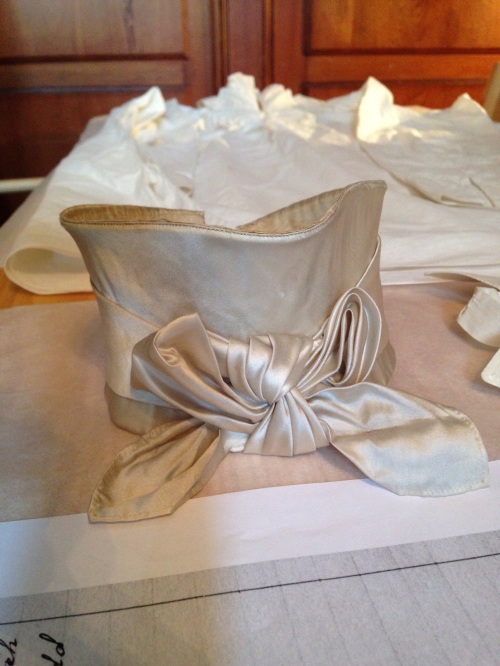 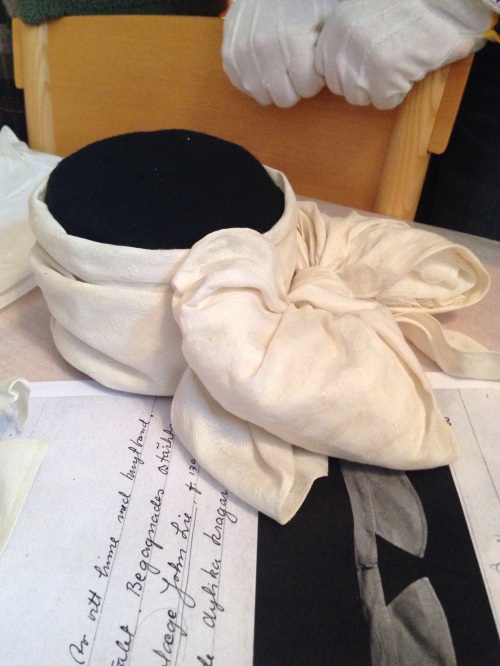 Neckcloth, in unstarched and badly tied condition. Nordiska museet, Stockholm. I photographed it, but failed to examine it more closely, so I cannot say if it is a stock or a neckcloth. At the time I thought a stock but now I think the latter. The image on the table shows an interesting detail: top collar sewn to a neckband. This would sit under the neckcloth with the ends showing under the chin. Is this the beginning of detachable collars?

No scroll back to the portraits, and do tell if the gentlemen are wearing a cravat or a stock!

I thought I would share my two favourite knots that even the beginner can master, considering that valets or personal servants are scarce in our day and age: The Mail Coach and The Barrel. They have been described many times. I borrow the following from Kristen Koster:

1. Hold one end of the cloth in your right hand and the other in your left so the cloth is stretched out.

3. Wrap the left side of the cloth around the back side of your neck so that the end comes out on the front right side. Repeat if your cloth is long enough, layering the cravat so that it covers your entire neck. Leave at least a foot of slack on the ends of the cloth for tying.

The Coachman or Waterfall Knot.

1. Repeat step 1-4 above. Make sure the ends are long enough.

2. Tighten the knot, and position it in the centre against the lower part of the cravat and collar. Now use the ends and tie another knot, and pull as tightly as desired. Arrange the ends down both sides of the shirt buttons.

My cravat tied in a basic knot, known as the “barrel knot”. I remember I was quite happy with the result.

A closeup of my basic knot. This one is not so tidy. The cravat is unstarched.

Conclusion: when looking at cravats and collars from the 1790´s to the 1810´s it is evident that they came in different shapes and used different techniques. Factors such as social status and place of geography propably made an impact, but I like to think that ones personal taste had a say in this,

So do not be afraid to experiment! I welcome comments if you have experienced the triangular cravat or tried the stock. Or starch!